Contact lenses are a popular modern-day option for quick and easy vision correction. But it’s hard to believe that the history of contact lenses stretches back more than five centuries, to an idea conceived by Leonardo da Vinci. His observations detailing ways to improve sight paved the way for modern-day contacts.

In 1508, da Vinci wrote the Codex of the Eye, Manual D, a book that recommended improving vision by submerging the eyes in a spherical glass bowl filled with water. Da Vinci also mentioned a monocle bowl for enhancing the sight in one eye. While the idea was intriguing, “da Vinci contacts” had the drawback of potentially drowning the patient in the process.

A new point of view creates a new contact lens

Familiar with da Vinci’s ideas, in 1636, philosopher Rene Descartes proposed placing a glass tube filled with liquid up against the cornea. Descartes’ invention was the first time a vision-correcting device was placed directly against the eye, making it a bulky but true “contact” lens.

In 1801, British scientist Thomas Young took Descartes’ idea a step further by creating water-filled glass cups that were glued around the eye using wax. While Young’s glass cup contact was interesting, few people wanted to walk around with glassware and water glued to their faces. 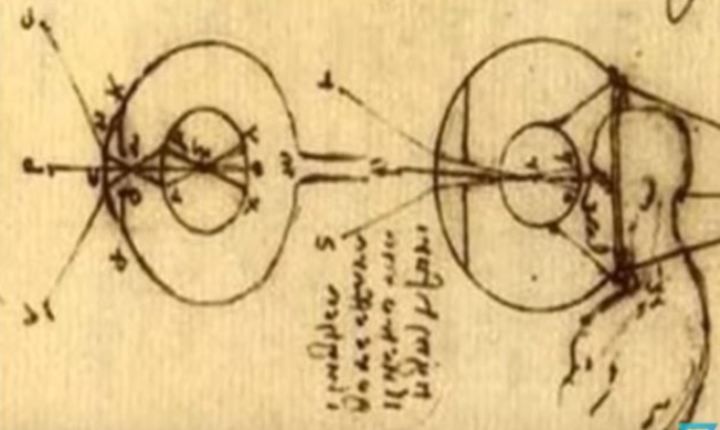 In 1887, physician and physiologist Adolf Gaston Eugen Fick was credited as the person who invented contacts as we now know them. Fick’s first contact lenses were made out of blown glass. Fick first tested his contacts on rabbits, then himself, and finally enlisted a group of volunteers.

The contacts were heavy and thick and could only be worn for two hours at a time. A grape sugar concoction was placed between the eye and lens to prevent friction. Glass and grape sugar in your eyes seems pretty disgusting, but this breakthrough paved the way for contemporary contacts.

In 1936, the history of contacts was changed forever when optometrist William Feinbloom developed a lens that was a mix of glass and plastic, resulting in contact lenses being lighter and more comfortable than those made from glass. Feinbloom’s contact lens research was initially meant to help patients with severe vision loss, but his invention ended up impacting the lives of millions of people who require vision correction.

After World War II, advancements in technology resulted in contact lenses that were even lighter and more comfortable. Optometric improvements resulted in corneal contacts that were smaller than their larger scleral lens predecessors. These newer contacts could be worn up to 16 hours each day.

The main drawback was their inability to allow oxygen into the conjunctiva and cornea. Wearing these impermeable contacts for a lengthy period sometimes caused eye infections and other complications.

By the 1970s, vision researchers had the foresight to develop oxygen-permeable contact lenses, and in 1998, CibaVision developed contacts that were so safe and comfortable, wearers could wear them even while sleeping.

Could a medical condition have caused Mona Lisa’s less than enthusiastic look?

You’ll be shocked to discover which popular historical “facts” are actually fables.